The tale of the pickled waxwing

Earlier this year, a lot of London year-listers will have traipsed round the North Circular to Finchley, and to the Total Garage on Regent’s Park Road. Why? To see a lonely, solitary Waxwing, which hung about in these suburban surroundings for a month or so before starting the long flight north. It hasn’t been a vintage Waxwing year …

Unlike 2005, when Britain experienced a true waxwing invasion, with thousands of these striking pink birds sweeping south across the frozen country. In mid-January, we got wind of a flock of waxwings not far from our office, which is slap-bang in the middle of London. Its not often you get to see flocks of anything round here, let alone a scarce winter

visitor, so Nigel and I downed tools and set off in hot pursuit.

We were greeted just outside Warren Street tube station by a remarkable site – a flock of 110 waxwings, alternating between some tall plane trees in a nearby square and a very small tree with berries on the pavement, with an attending flock of around 110 birders. You couldn’t have got better views of either.

One of the birds had flown into an office-block window, had kicked the bucket, and was lying forlornly on the pavement. Obviously I couldn’t just leave it there – the curse of the wandering zoologist – so I was soon on my way back to the office with a pocketfull of dead waxwing. This proved useful for scaring the more squeamish among my fellow editors, but I must admit after taking the bird home I wasn’t quite sure what to do with it. A brief period in the freezer was clearly unsatisactory, so this poor bird’s long journey from the Arctic north ended with it being pickled in a large onion jar in my shed, where it resides to this day. 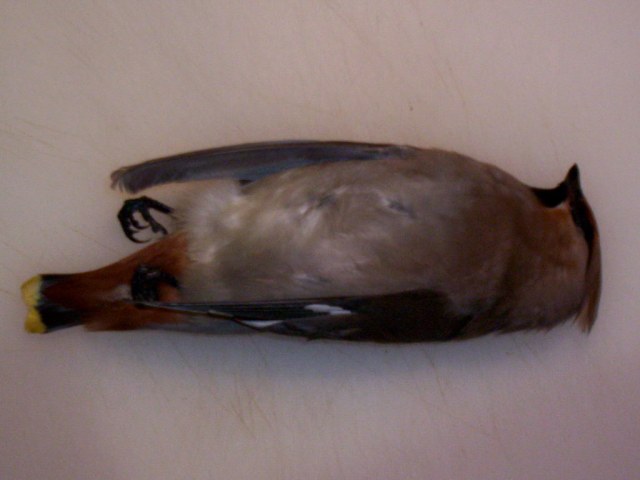 Team Helm does actually have previous when it comes to pickling interesting things that turn up on our travels. For example, one of the many reasons for which Nigel is renowned in the company is the permanent presence on his desk of this admittedly gruesome item. 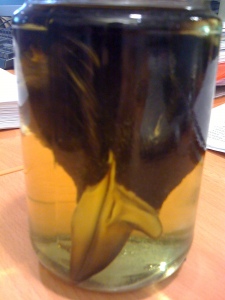 Now, here’s a question for the more ID-aware among you. The head of which species is pickled in this jar?

Send your answers to us by the 26th June … a Helm field guide of the winner’s choice awaits, with the winner picked at random from correct entries (UK entrants only; editor’s decision is final!).

f
Learn more about the land of the waxwing here:

← Elephant in the room …
Gardening for Wildlife →