This week, a guest post from author and photographer Clive Finlayson, on an incredible encounter around a carcass in the Pyrenees …

It’s cold, actually it’s freezing – hard to believe that I am in the Iberian Peninsula and not somewhere in the Arctic. The temperature has plummeted to -11oC here at 1,600 metres in the Pyrenees. It’s January. Having to keep motionless in the dark really doesn’t help much, nor do the layers of thermal underwear, tights, pairs of socks … the sky outside is intense blue. That should, at least, ensure good conditions for photography. But will our target birds arrive today?

It’s now 10am and my wife and I have been in the hide for four hours. The sun is up but the temperature stays below freezing. Some silhouettes flit past. They are large. We focus the cameras on the deer carcass laid out barely 15 metres away, and we wait … out of nowhere a Griffon Vulture appears, as though by magic, but he’s been soaring cautiously above the bait – we just couldn’t see him with our limited view. A blink of the eye and there are now twenty vultures on the ground. They look around nervously, unsure. We avoid the temptation of clicking away. This would be the wrong moment. If they get spooked now, that will be it for today. Ten minutes later and a hundred or so Griffons approach the carcass. The first one goes for the intestines and starts to open up a gash. Others come in quickly. They start to scream and chatter at each other. The frenzy has started. Now we can start to shoot! 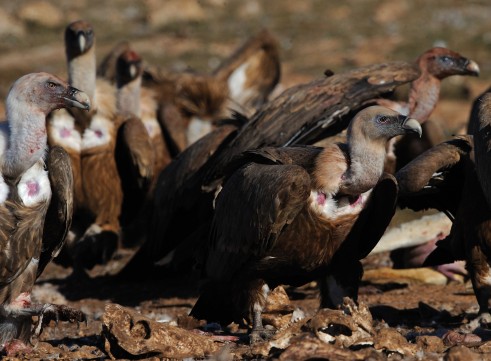 Twenty minutes and hundreds of photos later the deer is a skeleton but our work has only just begun. Hanging around the edge of the frenzy, eight Black Vultures now come forward. They may be larger but they cannot compete with so many Griffons. But there is plenty for them to eat now; tough tendons, sinews and hide all get torn to shreds by their powerful beaks. Even now we haven’t got what we came for and we know we may not get it at all. Previous visits have ended in disappointment – they didn’t come down or they kept some distance. Today is different. We can see their distinctive shadows on the ground – large with a wedge-shaped tail … 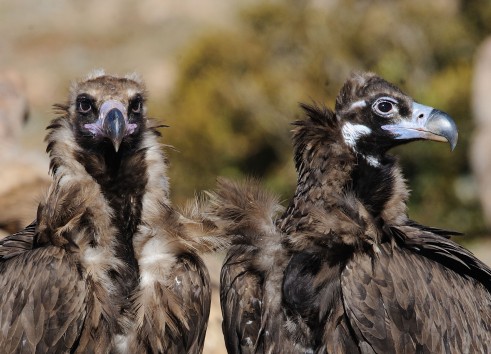 Black Vultures - the Face of Death.

Then, as unexpectedly as the first Griffon, our first Lammergeier is down – a first-year bird. This one stays on the edge of the commotion. It looks around nervously but then starts to walk towards the hide. A second bird puts it up as it lands. These birds seem to have the habit of landing close to each other in threatening fashion, often displacing each other. And the young ones seem more aggressive than the adults. Then the “wow” moment as the first adult lands. Its hard to believe how spectacular this bird is when it is just a few metres away. 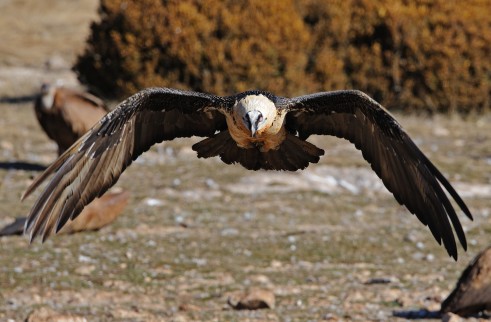 Anvils? Who needs anvils. The Lammergeiers find their ideal bones, manipulate them with dexterity and swallow them whole! That’s just one lesson from watching birds close in. It’s only when the optimal bones are exhausted that the larger ones are carried away, held in one foot or with the beak.

The scene I have described would have been a familiar one to our prehistoric ancestors. In fact, most of the Palearctic species around today predate the last two million years of glaciation and many are much older. Lammergeiers shared their Palaearctic range with the Neanderthals – the fit is almost too exact – and they must have come into close competition for bone marrow. No doubt the Neanderthals watched the vultures, who led them to sources of food. 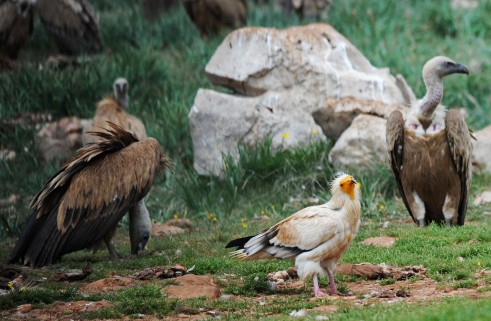 An Egyptian Vulture joins the fun.

I’m now back at home in Gibraltar, going through the palaeontological collections that I have been excavating here for twenty years. I bring out a set of bones from a Neanderthal occupation level. In my hand is a metatarsus of a Lammergeier and the box also contains Griffon, Egyptian and another large vulture (probably Black). The bones are 40,000 years old. I reflect on the history of the avifauna of the Palearctic. How did climate shape the fates of the birds? Can we combine the fossils with the living birds to give us a better understanding of the history and biogeography of Palaearctic birds? In Avian Survivors I hope to answer these questions and more …

Clive is the author of Avian Survivors: The History and Biogeography of Palearctic Birds – on sale next month! 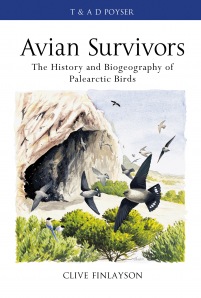