With their emerald-green plumage, bright red bills and raucous calls, Ring-necked Parakeets seem to be everywhere these days. Admittedly rather pretty, these tropical parrots have been ‘naturalised’ as UK birds since the early 1970s. Theories abound on how they got here in the first place; some say they escaped from a studio during the filming of the African Queen; others claim that Jimi Hendrix liberated a few to jolly up London a bit. All enjoyable bunkum, but either way, their population has boomed over the last decade; they are now common throughout the London area, and are spreading fast. 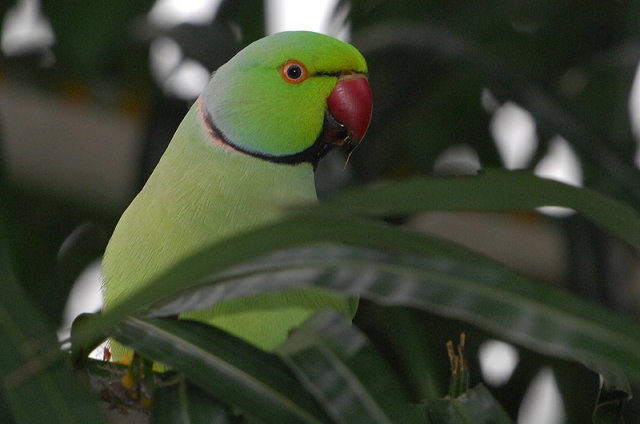 I love Paris in the springtime; I was there a couple of months back. Like many other European cities, Paris, too, now has its very own recently established parakeet flock. I was pleased to watch a group screetching away merrily in some trees outside the Panthéon, before taking off in a swooping green flash across the city.

Later that day, I ambled into the Musée de Cluny, and popped inside to see, among many wonders, one of mediaeval Europe’s most famous tapestries – La Dame à la Licorne, or The Lady and the Unicorn, a series of six imposing, largely red panels, five of which are loosely based on the ‘senses’. Made around 1490, they truly are a wonderful sight. Among the richly detailed needlework, and nestled among the intricate leopards, monkeys and giant white rabbits on the panel known as ‘taste’, I was truly gobsmacked to see this:

Its a parakeet! But on a tapestry made in 15th-century France. It has to be a Psittacula parakeet, but which one? The absence of a red on the wing strongly suggests that this is Ring-necked (as opposed to Alexandrine, the only other contender). How on earth did this exotic wonder crop up in a tapestry in mediaevel France? The bicoloured bill is suggestive of the north Indian subspecies of this bird (as opposed to the geographically closer African one).

A little research suggests that the species has a long history in aviculture, so it may be that the bird our Lady is feeding was actually bred in captivity. Or it might have been traded across from eastern Europe or, who knows, even further afield. Either way, birds of the same introduced exotic species that was swooping above my head some half an hour before were presumably kept in the very same city, more than 500 years before.

So although it seems like they’ve only just bustled into our lives, these noisy green parakeets have been with us in Europe for a long time – I had no idea just how long.

Learn more – lots more – about parrots in this Helm guide: