The wonder of waders

Waders have long fascinated me – there is such variety in this wonderfully complex group of species. I well remember flushing my first Jack Snipe, from a derelict gunsite on the Hampstead Heath extension in north London, back in 1952. Many years later I wrote the text to complement Stephen Message’s excellent illustrations in our field guide Waders of Europe, Asia and North America.

While the challenges of separating very similar species, like the ‘peeps’, are always fascinating and can provide one with great satisfaction, when a correct identification is made, it is often some of the more exotic species that provide me with greater excitement, including some outside the range of this book. Some years ago I set myself the ambitious target of seeing all the waders of the world and photographing as many of them as possible. The book essentially deals with those species in the northern hemisphere and just one still eludes me, the Great Thick-knee.

As you read this I shall probably still need to see just five southern hemisphere species too, having added the last two African species during November. Somehow, I’ve managed to miss the Australian Pratincole, but the real challenge is to see the last four South American snipe species which have so far eluded me: Puna, Giant, Fuegian and Imperial. Having travelled widely in this pursuit, there are many tales to tell.

Australian Painted Snipes. The female (left) is the brighter and more colourful in this species.

The separation of the Australian Painted Snipe as a different species from the Greater Painted Snipe meant a trip to Australia. I again arranged to join Philip Maher, as my guide, and he came up trumps. He had located an area, north of Deniliquin, where he’d seen a pair. During the afternoon, we did flush one but never saw it at rest. Towards dusk we prepared to wander around the open marshy habitat again and once darkness fell, we started our exploration. It wasn’t long before his searchlight shone on one, but again, it flew and it was a while before we relocated it. In fact we discovered a male and a more attractively plumaged female, both of which I was able to photograph successfully, as we were apparently less of a threat to them in the dark. It was an immensely rewarding experience.

To see remote species, like the Tuamotu Sandpiper, requires joining an organised birding trip in order to get to isolated islands where small populations survive. In September 2010 I joined the Birdquest group on their French Polynesian tour, which provided me with that opportunity. As I lowered myself off the zodiac onto the rocky shore of the island of Tenararo, then walked up the sandy beach, I was virtually greeted by a pair of these exquisite birds running across the sand towards me. They are so different from any other wader and a real delight to spend time with. Several pairs of them entertained me for much of my time on this exotic island, with their squeaky calls, short-tailed fluttering flight, confiding, even curious behaviour and habit of alighting practically anywhere – on the shore, among the palm vegetation, or on the branches of even the tallest palms. 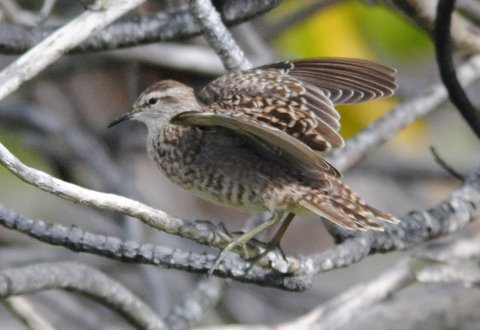 The Tuamotu Sandpiper - one of the world's rarest waders.

Don Taylor is the author of our Helm Field Guide Waders of the Europe, Asia and North America.