Nicola Chester invites you on a trip to see that well-loved British mammal, the otter.

I am obsessed with all manner of British wildlife, but particularly so at the moment with otters – having just spent the past year writing about them. I read about otters, track them and, very occasionally, see them.  But this winter’s flooding has meant my usual riverine haunts are off limits – changed and overwhelmed.

So I dream about them more, think I see them in unlikely places: I have an otter curled up wetly in my brain like a strange hat, leaking river water out over my eyelashes.

The flooding will have displaced them, as it has so many other species, including our own. The tunnelled tracks through the grass, the slides and the sprainting ‘seats’ on the tumps of greater tussock sedge – all my touchstones, as well as their holts – are still under water.

On my last foray, I went as far as my welly-tops allowed, to stand in awe at lakes gated and divided by fences, drowned snowdrops gleaming below the surface like a submerged village. Half-forgotten streams, brooks and bournes had risen and swelled, rioting like a pack gone wild, hunting downstream to re-plumb their map of old routes and break over new ground to pour into a river already too full of itself.

Even now, as I look for the river’s edge through the wood, leaves from the tall poplars still carry the reverberations of all that rain like tuning forks; their frisson of rustling making the sound of rushing water. I find my way in at half-past-five, testing alternate steps for solid ground.  Barbed wire and bramble arches are festooned with rags of reeds tugged from the water’s flow.

It is impossible not to avoid the crack of so many fallen branches or creep quietly over such sticky, sucky ground. I concentrate hard, and before I have time to register a singing whine of steel rails, a train rushes up from Exeter and a brief moment of panic nearly sends me into the river as it blasts right by. I had forgotten the track was there at all.  I compose myself in the quiet afterwards, and find a tree to lean on.

This benign chalk stream, famed for its gin-clear clarity, is not like itself. It is flint green and grey as bath water and moving frighteningly fast. I think about the local stories of otter cubs being rescued downstream. Otters are intelligent, resourceful, curious and nomadic creatures and, although the challenges are many and varied, experienced, independent adults are equipped to deal with such a rapidly changing environment.

Just before the light starts to fail and I must go, something eel-like rises from the water in a curve and vanishes, downstream to where I’d been looking. There was no splash and it was not a fish. I watch the river until my eyes sting and run, but nothing re-appears. I know that, sometimes, this is all you see of a passing otter: a wave of its thick rudder tail as it dives, having spotted you first. What I saw whispers otter – but does not shout it. It could have been a branch, smooth and turning in the strong current – and I know, to be here at the precise time the otter was passing, in a river in spate such as this – and to see it? Almost – but not quite – impossible.

Nicola is the author of RSPB Spotlight: Otters 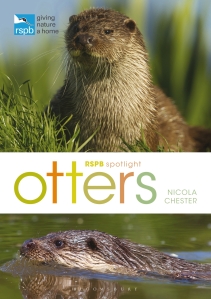 Also look out for:

← Red dragons
Get Picking this Autumn →