Posted on June 11, 2015 by bloomsburywildlife

Today the robin was crowned Britain’s National bird and author David Lindo a.k.a the Urban Birder has been fronting the campaign.

A nationwide ballot saw more than 200,000 people elect the robin as Britain’s national bird, after it swooped away with 34 per cent of the vote. It beat competition from the barn owl, which came second with 12 per cent, and the blackbird in third with 11 per cent.

It’s time now to give our national feathered friend it’s time to bask in the limelight. This month, we launch the next in our Spotlight series – which just so happens to be all about Robins! RSPB Spotlight: Robins gives us an insight in to their secret lives… 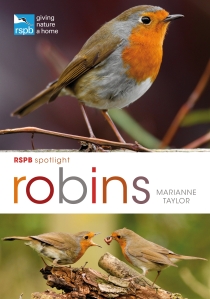 Our most iconic bird, the Robin, is one of the most characterful and familiar of all our garden visitors. Their melodious voices, bright red breasts and cheeky attitudes always endear them to us, but how much do we really know about them?

Despite their cute appearance, Robins are aggressively territorial and hold their territories all year. Their year-round presence has helped them become a beloved and instantly recognisable species. Now, in this delightful new book, Marianne Taylor provides a revealing account of their life cycle, behaviour and breeding, what they eat and how they hold their territories, and she looks into the many cultural representations of these much-loved little birds.

David Lindo said: “The robin is Britain’s most familiar bird so it’s perhaps fitting that it has been chosen by the nation to be our national bird. The Vote National Bird campaign is in fact a victory for all our British birds… It has reminded the British people how much they love the nature around us.”

David said he would speak to the Government once the public had voted to see if the winner can be awarded the title officially – all part of his greater plan to get more of us walking around in the cities to stop, close our eyes and #lookup. You can hear more on David’s musings in his new book Tales from Concrete Jungles out this week.