Posted on July 6, 2015 by bloomsburywildlife

Over the past eight years or so, working in collaboration with Donald S. Murray has taken me, and my work on a series of wild, wet and often wind-blown journeys, both real and imaginary! The journey for Donald’s forthcoming book, Herring Tales, began with a discussion on Edinburgh’s Royal Mile, relaxing after a busy reading of The Guga Stone at the National Library of Scotland.

Talk turned to the new book, and particularly to Donald’s correspondence with renowned neuroscientist, Oliver Sacks. Sacks had included a copy of an article he had written for the New Yorker, Fish Tales – Clupeophilia, in which he describes a lifelong association with the humble herring.

Subconsciously influenced by Sacks’ title, this was to be the start of Donald, and myself, through the drawings, becoming clupeophiles, and in particular a fascination with the herrings of the northeast seaboard of Europe and the wider North Atlantic. Donald had discussed with me the basic structure of how the book was going to work, and I began to plan how I could add images to visually enhance the story of how the silver darlings’ shaped the human tastes and history of northern Europe.

A few ideas floated around, but it wasn’t until Donald decided he was going name each chapter after a well-known song title that the plan was firmly on the hook. I would create a series of chapter title images, in the form of an old-style vinyl record label (younger readers, ask your parents!), with the subject relating to the chapter’s text.

The result was fourteen drawings, with a wide range of themes: from kippers and gulls, to fishing fleets and gansey patterns, the odd recipe and many more. As always with Donald’s writing, this book was a gift to me, and I immediately could see images as I read the text. We have always had an empathy with each other’s work, and over the years this has developed into a strong friendship and working relationship.

Each image was developed through discussions with Donald and created to fit the record label format.  Author and publisher were delighted with the ideas and the drawings carried on apace. Through weeks of research and sketchbook notes the drawings took shape, some chapters easy to work with, others not so, but finally it all came together beautifully with a mixture of serious and not-so- serious results. As with previous book images for Donald’s writing, I’ve used pencil as my medium for the work as I think it has a certain subtlety that you can’t get with ink.

Over the next two months, leading up to the publication date of the book, I shall be displaying the drawings on my website blog, The Net Mender, with descriptions of the work and sketchbook notes on how the ideas were created through our collaboration of words and images. 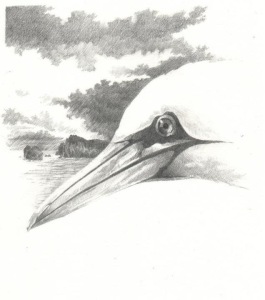 The Net Mender, named after a long lost photograph of my herring fisherman great-grandfather, has featured my collaborations, exhibitions and studio notes since 2007, including many with Donald S. Murray. One of the earliest posts, from November that year features a poem written by Donald after one of our first workshops together on Shetland.

To find out more about Herring Tales and to see the illustrations, go to www.douglasrobertson.co.uk and click on The Net Mender button. Post can also be viewed at www.twitter.com/thenetmender.