Posted on September 9, 2015 by bloomsburywildlife

A Message from Syria

Phoenix – arise from the ashes

Taken in the rubble of a bombed house in the ancient Syrian city of Palmyra this photo, which appeared on Facebook, was immediately tweeted throughout the world, including by Frank Gardner, a keen birdwatcher. 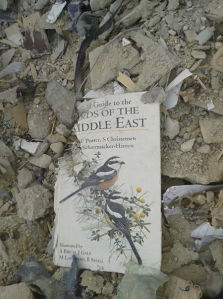 The Facebook message from the Syrian birdwatcher who owned the book:

‘What is very precious to us, is totally worthless to others.’

Plans are now well underway for an Arabic version of the second edition of Birds of the Middle East and the exciting cover has just been unveiled. This book is a joint venture between Bloomsbury, BirdLife International and the Ornithological Society of the Middle East. I hope the Bloomsbury’s ‘Helm Imprint’ Arabic logo catches on. I love it, especially as it translates into ‘Dream Field Guides!’ The plans are for a launch in Arabia next year.

Apps are now the new book and rapidly becoming the way of the world. Books, of course, will always be important and have their place, but sending them to remote places or where mail is not reliable can be a problem. With this in mind a new App has been developed for the remote mountain range of Peremagroon in Iraqi Kurdistan – internationally important for its fantastic wildlife.

More about the app…

‘I loved it, now I know what bird I was seeing everyday in my faculty, thanks for the app its very useful. just one thing if possible put the Arabic and Kurdish name, if that is possible.’

Not only will this be done, but the whole app will be translated into Kurdish and Arabic.This App is just one part of a conservation education programme in Kurdistan between Nature Iraq, BirdLife International and the Centre for Middle Eastern Plants under UK’s Darwin Initiative. Read the story about some of its achievements:

It has been great to have Bloomsbury’s support for this.
Richard Porter

← Douglas Robertson discusses Herring Tales, fishy record labels, and The Net Mender
How to Get Creative with Herring →