Posted on January 15, 2016 by bloomsburywildlife

The Brightest Star of Them All -The Leopard

There’s a moment in The Chronicles of Narnia when Hwin the mare meets the great lion Aslan. “Please,” she said. “You’re so beautiful. You may eat me if you like. I’d sooner be eaten by you than fed by anybody else.”

I’m always reminded of Hwin when I see a leopard. Particularly when I see a night-hunting leopard in the Luangwa Valley in Zambia.

The Valley is a different place by night. The day-shift has clocked off, the night-shift is in full-swing. Creatures you never see in the day are now centre-stage: and you can see them because in the Valley you can check them out in a vehicle with a big spot-light.

Some animals hate it, elephants and hippos especially, so you never shine on them directly. You can influence the outcome of a hunt by dazzling potential prey, and that’s strictly forbidden. But many of the other animals take it in stride.

These include genets, small spotty cat-like creatures, civets, porcupines, hyenas and honey-badgers, which have a glorious reputation for ferocity. It’s another world, and quite as enthralling as the world of daylight. Or perhaps even more enthralling because at night the stars come out.

And brightest star of them all is the leopard. To catch one in the spot-light is to know how Hwin felt. Nothing moves so beautifully as a cat, no cat moves as beautifully as a leopard. They walk as if every joint had been bathed in a vat of oil and when the light hits them they glow as if lit from within.

There is a feeling of astonishment that something so inexplicably beautiful should exist, and that you should be allowed to see it. They are immaculate: though since they have spotted coats they are technically speaking, maculated. Immaculately maculated, then.
Leopards have become for me a kind of confirmation animal. When I get back to the Valley there is always a great sense of joy, a combination of familiarity and the unknown, of comfort and of danger. But when I see a leopard I feel that yes, indeed, this is my spot. This is, indeed, the sacred combe that I have been seeking all my life.

This is a blog piece from Simon Barnes, inspired by his new book The Sacred Combe out January 2016. 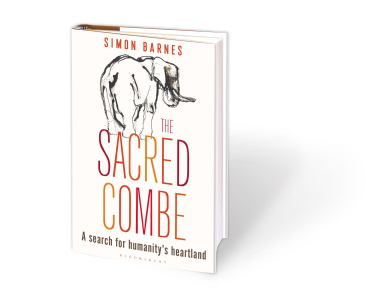 ← How to feed your Garden Birds this Christmas
Whale Watching – get out there, and good luck! →