Posted on June 22, 2016 by bloomsburywildlife

A MOUNTAIN BY THE SEA

One of the earliest decisions I took in writing my Mountain Flowers book (to be published by Bloomsbury in August) was that I would have to omit Ireland from its scope. This was mostly because I was worried about keeping the length to the required 416 pages with so much ground to cover, but I was also conscious that I had never properly botanised on the island. I was particularly ashamed never to have visited The Burren, one of the most special botanical sites in the whole of the British Isles. What better way, therefore, to celebrate finally sending the book to the printers than to head across to The Burren in early May this year? 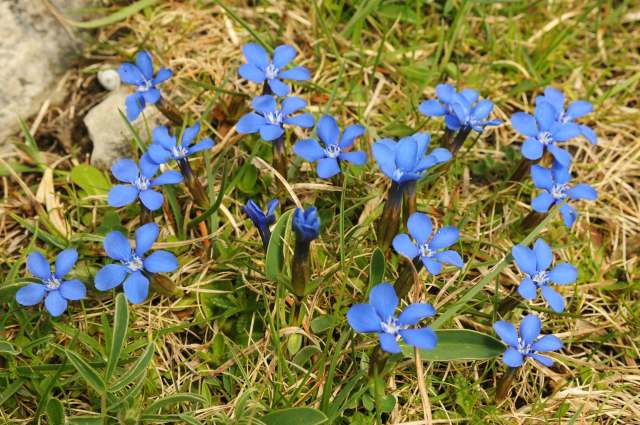 Spring Gentian flowers as abundantly on The Burren as anywhere I’ve seen it in the Alps.
© Michael Scott/Bloomsbury

I wasn’t disappointed. The Burren, on the west coast of Ireland in County Clare, is a wonderful site for botanising with an intriguing mix of arctic-alpine species that we would normally expect to find in mountains and southern species more typical of Mediterranean climates. On the limestone pavement at Poulsallagh, I found the vivid blue flowers of Spring Gentian (Gentiana verna) more abundantly than I have seen it anywhere else, even in its heartland in the Alps, alongside displays of Mountain Avens (Dryas octopetala) to rival any I have seen in the Arctic. The pale yellow flowers of Hoary Rockrose (Helianthemum oelandicum), a species I know otherwise only in Upper Teesdale, were everywhere – and much else besides. I’m still glad I excluded The Burren from the book. It would have merited a long chapter to itself, even without the other Irish sites, and what would I have had to omit from my coverage of England, Wales and Scotland to find this space? However, it reminded me again of the resilience and adaptability of the flowering plants we associate with the mountains; the arctic-alpine species in The Burren were telling me this was a mountain, yet I had climbed no higher than 150 metres above sea-level. 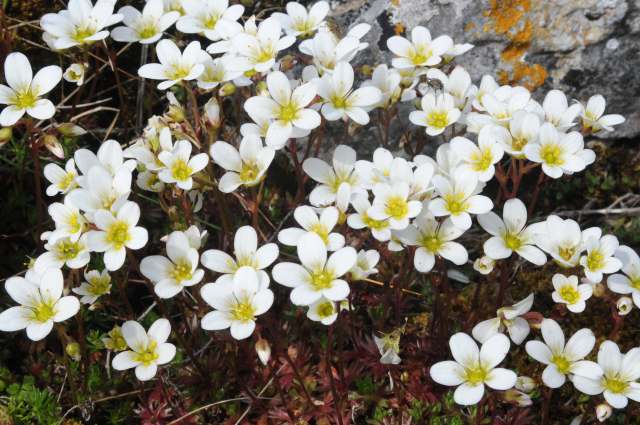 There was one plant I especially wanted to see. Irish Saxifrage (Saxifraga rosacea) features briefly in the book, but is a species I had never seen. I searched hard for it at Poulsallagh but failed. There was one more opportunity: I knew it was recorded at the eastern end of Inis Oírr, so we took the ferry across to the island with several hours to explore. We stopped at one scenic spot and noticed white flowers on a grassy bank. I scrambled up to them and immediately recognised how similar the plant looked to the more widespread montane species Mossy Saxifrage (S. hypnoides). However, its flowers had broader petals and its leaves were much more densely tufted, with subtle differences in their shape. It was Irish Saxifrage, and I had almost forgotten the exhilarating thrill of seeing a ‘new’ species for the first time. We continued onto a large expanse of limestone pavement, just beyond, and it seemed to be covered with large tussocks of the saxifrage in wonderfully abundant, showy flower. In fact, it reminded me of flowery plants sold in garden centres as Mossy Saxifrage which I have always dismissed as much too showy to be that species!

Irish Saxifrage in its limestone pavement habitat amidst the distinctive landscape of Inis Oírr.
© Michael Scott/Bloomsbury

The Burren is well known as a site for Irish Saxifrage, which is also found in central Germany, the Jura mountains and elsewhere in central Europe. However, as with so many mountain plants I discuss in the book, there is a mystery about it too. Irish Saxifrage was recorded as growing in Cwm Idwal in Snowdonia in 1796, although it has not been seen there since 1978. There are herbarium specimens of it from elsewhere in Snowdonia too, and one labelled from Glen Dole, presumably Glen Doll in Angus, another classic site that I write about in the book. I always assumed that Irish and Mossy saxifrages were so similar that these records might have arisen from confusion, but the overall ‘jizz’ of the plants I saw on Inis Oírr was very different from the Mossy Saxifrage I know in the British mountains. So does Irish Saxifrage still lurk, unrecognised and overlooked, somewhere in Snowdonia, Angus or elsewhere in the mountains of Britain? That is precisely why I wanted to write my Mountain Flowers book: to encourage more botanists to take to the hills, and more hillwalkers to look at the wild flowers beside their boots, in the hope that we can answer this and many other botanical mysteries that still persist, even in the well-tramped mountains of Britain.