Posted on June 22, 2016 by bloomsburywildlife

Our Favourite Facts from the RSPB Spotlight Series! 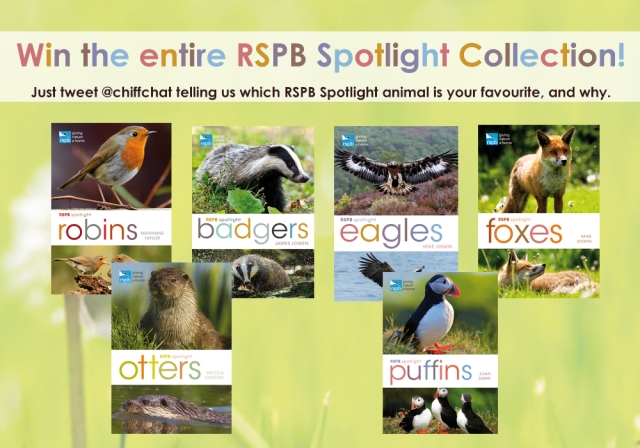 We’re also offering you the chance to win the whole series. Simply respond on Twitter @chiffchat telling us which RSPB Spotlight animal is your favourite, and why.

Despite their reputation as being ‘the strong and silent type’, Badgers do communicate… through their droppings! Badgers use latrines − which comprise collections of shallow hollows called dung pits − as message boards. Many latrines lie beneath trees, perhaps to protect the contents (and their ‘press release’) from being washed away by rain. Most latrines are located either close to the main sett, along the territory boundary or where Badger paths cross. This indicates that one purpose of poo clues is to emphasise ownership of the territory. Strikingly, however, neighbouring Badgers share latrines along territory borders. This suggests that Badgers use latrines to exchange information about who is in their gang, rather than to simply erect a ‘no entry’ sign.

A flying Golden Eagle can reach speeds of up to 190km/h (118 mph), and when accelerating into a dive can even pick up speeds of 240-320 km/h (150-200mph)! The sudden braking of the bird by spreading its wings at the point of impact can create a tearing sound audible for some distance. ‘Like a thunderbolt it falls’ said Tennyson, and he was not far wrong.

Robins might hold the key to understanding a mysterious ‘sixth sense’ observed in many birds – Magnetoreception, the ability to sense magnetic fields. This skill is down to the presence of crystals of the iron oxide magnetite within receptor cells in the skin of their bills. These cells send messages to a particular part of the brain in response to magnetic fields, but this ‘compass’ system also requires a certain level of light to work properly. The combination of seasonal changes to light levels and the Robin’s ability to detect the Earth’s magnetic field, allows it to orient itself correctly for migration.

Foxes have an incredibly varied diet and differing hunting techniques adapted to this. When hunting worms, for example, a fox will grip the slithery morsel in its incisors, but instead of tugging violently, which would break the worm, it pauses until the worm relaxes, then pulls gently and steadily so as to extract the whole animal, unbroken, from the ground. Parents teach their cubs this technique by example.

Have you ever wondered what Otters keep in their pockets? The Sea Otter is one of few mammals that have learned to use tools to access food. It will search for and pick up a rock from the ocean floor, along with hard-shelled sea species such as clams and mussels, and pop these into its pockets- deep rolls of skin that form pouches under each foreleg. On surfacing, the Sea Otter places the rock on its stomach and, holding the hard-shelled morsel between its forepaws, will smash it against the rock until it can get to the soft meat inside. Particularly good rocks are then often put back in its pockets, for use another time!

While the general rule in birds is that smaller birds have a shorter life expectancy, and larger birds longer ones, the Puffin seems to be an exception to this. The oldest puffin ever found in Europe was 41 years old, on the Norwegian Island of RØst. Long-term studies of Puffins in the UK have revealed survivors not far behind the Norwegian bird, with a 39 year-old bird- ringed in 1974- spotted again in 2008. Were it not for the evidence of ringing, it would be impossible to pick out the senior citizens in a Puffin colony as- unlike us humans- Puffins show no outward signs of old age.

For more information about the Spotlight Series, visit www.bloomsbury.com

← A MOUNTAIN BY THE SEA
Take Part in The RSPB Big Wild Sleepout! →