Posted on September 15, 2016 by bloomsburywildlife

An article by Marianne Taylor, author of Birds: Myth, Lore and Legend

For those of us lucky enough to live and work in sturdy, heated buildings, finding out what the weather is going to do is merely a matter of interest. But for our ancestors, and for plenty of modern cultures as well, accurate weather prediction could mean the difference between life and death. Humanity has a very long tradition of using natural phenomena, including bird behavior, to try to forecast the weather, and this is reflected in folklore from around the world.

Fishermen and merchants risking their lives at sea to deliver goods or bring home a catch have a particularly pressing need to understand the weather. Who better to help them than the seabirds that spend virtually their whole lives out over the waters, coping with whatever the elements throw at them? The European Storm-petrel is one of the smallest of all seabirds but one of the toughest too, able to ride the wildest seas. Its English name reflects a widespread British belief that its arrival predicts – or perhaps even causes – sea storms. Another old British name for the species, ‘Mother Carey’s Chicken’, references mater cara, the Virgin Mary, to whom sailors pray for safety at sea. The storm-petrels’ big brothers, the albatrosses, are also said to bring bad weather if they linger too long close to a boat, but a brief sighting means good luck and fair weather for seafarers.

Singing in the rain

Several Britsh birds are said to call or sing in advance of a rainstorm. One is the Green Woodpecker, also nicknamed ‘yaffle’ because of its laughing voice, and ‘rain bird’ because that laughter supposedly heralds rain (the bird is laughing at the sun). The Red-throated Diver has the local name ‘rain goose’ in Orkney and Shetland where it breeds, because its drawn-out wailing call means imminent rain – while a different, more witches’-cackle version of the call is a sign of that the clouds will clear. In Africa, the mighty Southern Ground Hornbill’s booming call is another predictor of precipitation, as are the yells of black cockatoos in Australia. 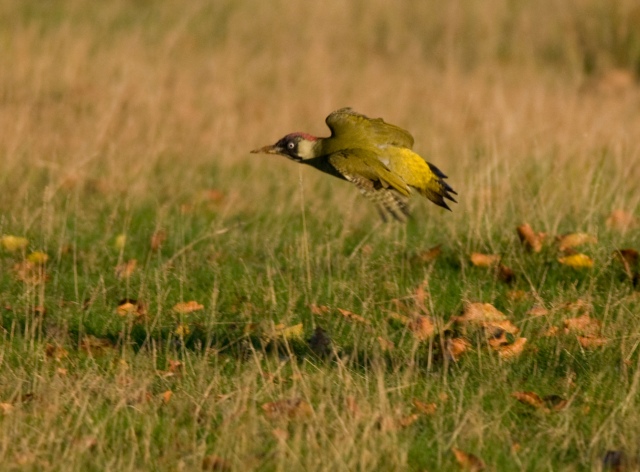 Its laughing call is said to herald rain, but the Green Woodpecker enjoys sunshine as much as anyone else.

Gulls turning up inland is often cited as a warning of bad weather at sea, but in truth many species of gulls have long nested and foraged inland.

Common Gulls are (probably) so called because they often feed on ‘common-land’, and can be seen inland regardless of the weather.

The idea that Rooks nest higher in treetops in years that are to have long sunny summers is also misguided, as Rooks habitually use the same nests year after year. In fact, the idea that birds can predict long-term weather patterns is rather suspect all round. When many Waxwings turn up in Britain in autumn, this is often considered to be a sign that the winter to follow will be severe, but in fact is related to past rather than future events. If it was a bad summer for berry-bearing trees and shrubs in Russia and Scandinavia, more Waxwings will be forced to move south and west to find food.

It is a shortage of food rather than a premonition of freezing weather that sends Waxwings from north-east Europe to Britain.

However, birds really do have some ability to predict weather in the short-term. A structure in the avian inner ear (the Vitali or paratympanic organ) is highly sensitive to changes in air pressure, which as all budding meteorologists know is the key to changes in the weather. This can give birds a day or more’s warning of advancing bad weather, triggering them to indulge in feeding frenzies (as noted in Blue Jays and other species in the Blue Ridge mountains, USA), or even brief migrations to safer areas (observed in Golden-winged Warblers in Florida). Snow Geese in North America seem to be able to dodge extratropical storms on their southbound migration, by varying their route and timing of departure.

It is very tempting to ascribe mystical powers to wild creatures. And birds certainly have more natural, innate ability to predict weather changes than we humans do. But of much more importance is their ability, honed by millennia of natural selection, to contend with bad weather, by sheltering or fleeing or simply enduring it. Or, in some cases, embracing it. It’s worth going outside on a wild-weather day to watch Ravens soaring and tumbling like windblown ashes on a blustery day, or pigeons rain-bathing with all the apparent delight of actors in power-shower commercials. Such sights are part of the joy of wildlife-watching and a joy that inspired our ancestors just as much as it does us today.

Read more about how historical accounts, scientific literature and superstitions have shaped our understanding of bird behaviour in Birds: Myth, Lore and Legend by Marianne Taylor.

← Take Part in The RSPB Big Wild Sleepout!
How to Make Mackerel Paté by The Ethical Carnivore →